‘nîpawistamâsowin: We Will Stand Up’ is an emotional award-winning film

“Colten Boushie was a young Native man, who decided to trade his life for an effort to create more understanding, more exposure for the unjust world of the legal system and unfair perception of Indigenous people.”

I write to you to share a big win for our movement. On Aug. 28—the day a North Dakota court wiped clean my record from the protests at Standing Rock—my legal team succeeded in convincing our judge that discovery material from my trial must be made public. This important victory for transparency and the First Amendment can better position water protectors for the battle against Keystone XL. These depositions now become valuable legal resources, especially as more states criminalize protest and hire private armies to protect their fossil fuel investments.

It’s critical that friends like you make an alternative investment in our movement. Your gift today can help us counter efforts to protect profits over people and oil over water by growing the power and reach of our resistance. We’re dedicating considerable staff hours to honing and disseminating our discovery materials so we and other legal teams can be fully prepared to fight environmental racism in court. We are all in this together. 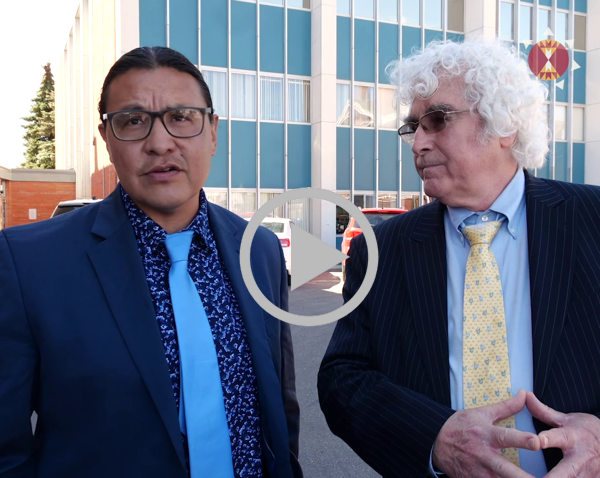 Outside the courthouse in Devil’s Lake, North Dakota, Daniel Sheehan and I discuss the importance of the judge’s decision to release discovery materials from my trial.

In depositions, our Lakota Law legal team pressed law enforcement officers on their lack of knowledge about treaty law and their inappropriate collusion with TigerSwan, a private military security firm for hire. These records can now assist other water protectors, attorneys, journalists, and filmmakers still trying to accurately convey the real story of Standing Rock and protect the importance of free speech in America.

Today, our movement to safeguard sacred water and ancestral lands has new momentum, but we still have much to do. White nationalists beholden to the oil lobby remain in power and, every day, our climate slips closer to the brink—just two more reasons to fight harder together. Free at last of any legal restrictions, I’m ready to press forward with all required urgency! I hope you’ll keep standing at my side, in person and in spirit.

Wopila tanka — Thank you, always, for your compassion and determination.

“VANCOUVER—In the latest setback for the Trans Mountain expansion, the Federal Court of Appeal has approved six new Indigenous legal challenges to the project, once again raising questions about the fate of the pipeline.

The Crown corporation that now owns Trans Mountain said planning and construction will move forward in the meantime, but lawyer and resource development strategist Bill Gallagher said he wouldn’t expect to see “any shovels in the ground any time soon.”

Bellegarde said he was writing the letter to voice his “sadness and grave concerns” over land invasions and attacks by gold miners, ranchers and loggers on Indigenous territories in the northern Amazon region of Brazil that resulted in assaults on Waiapi women and the killing of Waiapi Chief Emyra Waiapi.

“Canada must act now to express its commitment to the enjoyment of human rights by Indigenous Peoples everywhere by urging the government of Brazil to protect Indigenous Peoples,” said Bellegarde in the letter.

“I urge you to do what you can to communicate the need for the government of Brazil to end this violence and to stand up for the human rights of Indigenous people of the Amazonia.”

Bellegarde said in the letter that the Indigenous Peoples of the Amazon were in need of international support and he would be willing to “assist in communicating the joint concern of Canada and the Assembly of First Nations about this grave human rights situation.”

The AFN represents 634 First Nations across the country.

Freeland’s office said in a statement that the minister spoke with Bellegarde earlier this week and discussed the contents of the letter.

“Canada is extremely concerned by the fires in the Amazon rainforest and their impact on Indigenous people who have lived there for generations,” said the statement.

The statement said Freeland had also recently spoken with the foreign ministers in Brazil, Bolivia and Peru on the wildfire situation in the Amazon.

The Brazilian government of Jair Bolsonaro’s aggressive posture toward the country’s Indigenous territories was put under the international spotlight again as wildfires raged in the Amazon at an unprecedented rate.

Bolsonaro has been openly critical of territories set aside for Indigenous Peoples that were enshrined in that country’s 1988 Constitution.

In an Associated Press report Friday, Bolsonaro told reporters that past allocations of land to Indigenous people, many of whom live in the Amazon rainforest, had been excessive. About 14 per cent of Brazil is Indigenous territory, a huge area for a relatively small population, Bolsonaro said.

Without offering evidence, Bolsonaro initially suggested that non-governmental organizations started the fires to try to damage the credibility of his government, which has called for looser environmental regulations in the world’s largest rainforest to spur development.

On Thursday, Brazil banned most legal fires for land-clearing for 60 days in an attempt to stop the burning. Many fires were set in already deforested areas to open land for farming and pasture.

‘We need to support Indigenous people throughout the world’

Jody Wilson-Raybould, the former justice minister who will run as an Independent candidate in Vancouver in the coming federal election, said the survival of Indigenous Peoples in Brazil’s Amazon is at risk.

“They are a vanguard, they are on the bleeding edge of the reality of development, of recognizing Indigenous rights, recognizing the importance of the survival of communities and what Indigenous communities have to offer in terms of stewardship and Indigenous knowledge,” Wilson-Raybould told CBC News.

Wilison-Raybould, who is a former AFN regional chief, said countries such as Canada need to speak out when Indigenous rights are threatened elsewhere.

“As an Indigenous person in this country whose rights have been denied for so long, and the reality of the colonial legacy that exists in this country, it’s debilitating, and we need to support Indigenous people throughout the world that are facing similar, awful situations,” said Wilson-Raybould.

“We can’t continue to stand by and this is where it’s incredibly important for leaders, countries and Indigenous Peoples to speak out when they see this happening.”

Jorge Barrera is a Caracas-born, award-winning journalist who has worked across the country and internationally. He works for CBC’s Indigenous unit based out of Ottawa. Follow him on Twitter @JorgeBarrera or email him jorge.barrera@cbc.ca.