‘As we honor the Native Nations and Indigenous Peoples’ in the United States and North America, I ask, remember where you came from,’ says Tantoo Cardinal 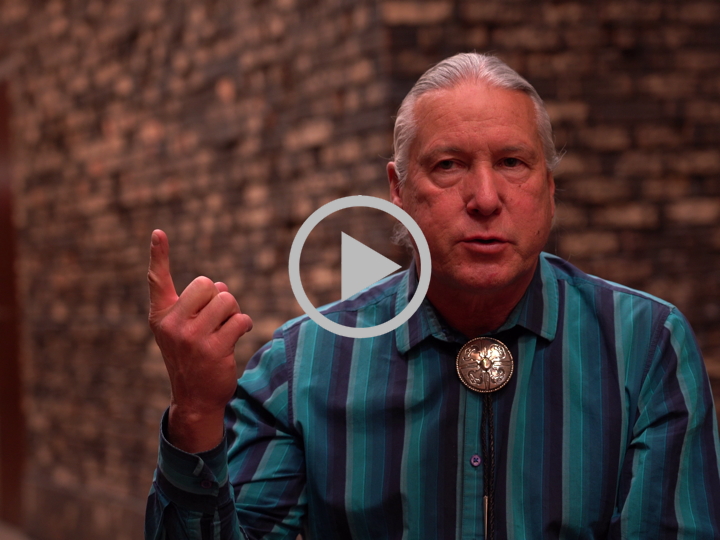 As an Indigenous woman, I feel the heavy weight of history. At Standing Rock, the dual traumas of colonization and the exploitation of Grandmother Earth have collided in our battles against oil extraction and pipelines. I cannot thank you enough for your support—and I ask you to stay with us through November’s hearing on DAPL’s expansion and the planned construction of Keystone XL in 2020. Pipeline resistance must and will remain our top priority for the foreseeable future.

As Native activists, our work to reclaim our own history is also critical. That’s why we’re challenging the root legal argument behind the subjugation of so many Indigenous people, both here and around the world. The Doctrine of Discovery, a papal declaration from the 15th century, was used as a basis for Manifest Destiny and continues to haunt my people today. It was cited by a Supreme Court justice as recently as 2005.

In February of 2017 at Standing Rock, the Oceti Sakowin issued a declaration in defiance of the Doctrine’s objectives. And earlier this year, I helped the Standing Rock Sioux Tribe organize and host a Doctrine of Discovery Conference, where we brought in top experts to explore solutions. I encourage you to watch our new video, in which a world-recognized Shawnee and Lenape expert, Steve Newcomb, sits down with us to explore how the Doctrine of Discovery still allows the domination of Indigenous peoples to this day.

We also went straight to the source. In 2016, the support of friends like you helped us organize 35 organizations to submit letters to Pope Francis demanding that he overturn the Doctrine. We also met in Rome with Cardinal Peter Turkson, a progressive from Ghana who oversees social justice ministry for the Church. The Vatican knows the deeply problematic nature of the Doctrine of Discovery and is considering Indigenous communities’ desire to have it revoked.

So, we fight on many fronts. I invite you to stay tuned and reach out to our team with ideas and solutions. Together with you, we are empowered. My hope is that in 2020, we can use our collective strength to stem the tides of imperialism, colonization, environmental racism, and the climate crisis.

Wopila — thank you for your solidarity!

The 15-year-old activist from Wiikwemkoong First Nation on Manitoulin Island in northern Ontario urged the global community to respect the sacredness and importance of clean water.

‘This is our future’: Coast to coast portraits of students at the climate strike

Peltier spoke at the Global Landscapes Forum, a platform on sustainable land use founded by UN Environment and the World Bank that’s dedicated to achieving development and climate goals.

She used the speech to draw attention to the lack of clean water in numerous Indigenous communities, which she says sparked her activism.

“All across these lands, we know somewhere were someone can’t drink the water. Why so many, and why have they gone without for so long?”

She said she’s been taught traditional knowledge from an early age about the sacredness of water, and that more should learn these lessons.

“Maybe we need to have more elders and youth together sitting at the decision table when people make decisions about our lands and waters.”

Peltier called for an end to plastic use as one step in restoring a more sustainable world.

Her speech comes a day after huge crowds took to the streets in Canada as part of a global climate strike.

The speech was her second at the UN headquarters, having urged the General Assembly to “warrior up” and take a stand for our planet last year.

Peltier, who is nominated for the 2019 International Children’s Peace Prize by the David Suzuki Foundation, has spread her message at hundreds of events around the world.

In 2015, Peltier attended the Children’s Climate Conference in Sweden, and a year later, confronted Prime Minister Justin Trudeau about his “broken promises” at a meeting of the Assembly of First Nations.

Our Morning Update and Evening Update newsletters are written by Globe editors, giving you a concise summary of the day’s most important headlines. Sign up today.

I’m excited to share with you that my friend, Greta Thunberg, is joining me for three events over the next three days in Lakota Country. More on that in a minute, but first, let me introduce myself. I’m Tokata Iron Eyes, daughter of Chase Iron Eyes, whom you have heard from many times in the past.

My father’s work on behalf of Native justice and environmental concerns is also my work. I will add that, as a young woman of color, I focus much of my energy on the issues of Missing and Murdered Indigenous Women and the climate crisis, as they are particularly close to my heart. I may be a high school junior, but I have already traveled the world and made many appearances to speak on these critical topics, including at January’s Women’s March in Washington, D.C.

I met Greta on a later trip to the capital. We were both in town to speak at an Amnesty International event. Being both the same age and vocal climate warriors, we quickly found that we have much in common, even though our backgrounds may look different.

As you likely know, Greta comes from Sweden, where, at 15, she began protesting a lack of climate action in Parliament. From there, she quickly rose to worldwide prominence, organizing school climate strikes, giving a TED Talk, and appearing on the cover of Time magazine.

I felt it was important to invite her to come see my homelands, and I’m so happy she accepted my invitation. We’ll be speaking on my home campus of Red Cloud Indian School tomorrow at 5 p.m. MST, then hosting an event in Rapid City on Monday before heading to Standing Rock, where I spent most of my earlier years, on Tuesday at 10 a.m. CST.

Together, we want to share our mutual inspiration to take action on the climate with more kids — and with adults, too. Our struggles here against the Dakota Access and Keystone XL pipelines are the tip of the spear in a global effort to move away from fossil fuels and begin living more conscious lives together, in harmony with our Grandmother Earth.

I can’t wait to share more with you later in the week. In the meantime, you can catch a video stream of our talk at Red Cloud at the Lakota People’s Law Project Facebook page. Stay tuned!

Pilamaya — I appreciate your solidarity with our struggle!