I met Ashley and her friend, both were still suffering from the night before, and we presented the Sioux elders with the banner. They really loved the blue color and how large it was with all of the students’ signatures. We were told to hang it on the front fence of Oceti Sakowin Camp. So, with another water protector, off we went to look for a spot. Class, know that your banner is hanging on the front fence to Oceti Sakowin, making history, supporting the water protectors here. 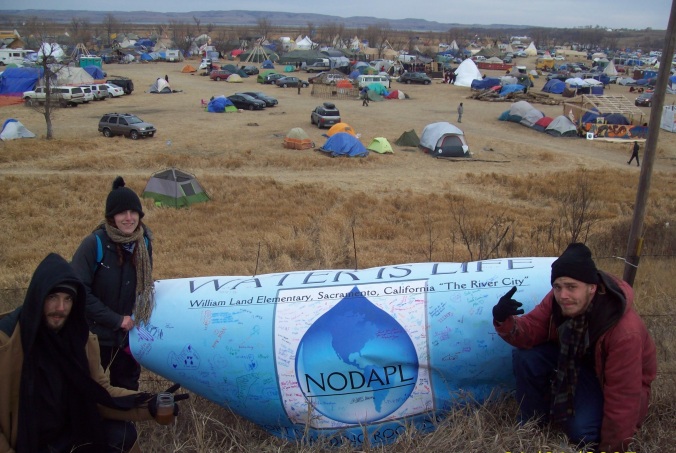 It is not allowed to take photos and videos in the camp, but I think you can see that there are thousands here. As the day wore on and we came back later, there were even more people coming and beginning to set up camp.

This item was found by the banner in the tall grass, they said it was a coyote jaw bone.

On the way to Bismarck to pick up supplies, we stopped at a pizza restaurant in Mandan, because Ashley’s friend was wanting pizza for days. It kind of broke the tension from the attack the night before. Both said their throats hurt from the mace and pepper spray, both complained of their skin still burning, and Ashley’s friend was very sore from the rubber bullets he took.

We could still find something to laugh about, which is our strength.

When we reached the Walmart in Bismarck, I met Vince again. He was happy to see me! We also saw some fellow water protectors in the store shopping for supplies. All of the people in the store were looking at us like we were from another planet. I made friends with another employee, he was from Liberia, Africa. He said he had only been in North Dakota for a few months. We bought first aid items like saline solution, beef, bacon, a large turkey, paper, pens, and markers, . Also, greens, lemons, honey, apple cider vinegar, coffee, coconut oil, scarves, and toilet paper. Basically, items for the three major units of the camp; the kitchen, the first aid tent, and the banner/poster group. In addition, we bought tobacco for gifts to the elders. The tradition is, if you want to speak to an elder you give them a gift. Natural tobacco and sage is considered appropriate. The total came to over $300.00. I also cash advanced $60.00 for gas and purchased lens wipes, extra batteries, and the all useful backscratcher. 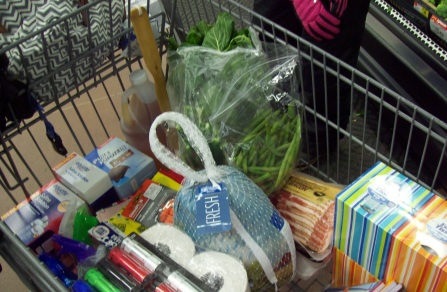 Then there was the long drive back to the Oceti Sakowin Camp. I got turned around in Mandan, used the opportunity to get gas, then found my way again. It is truly dark, the clouds kept the stars covered and I could only see as far as the headlights on parts of the road. I dropped Ashley, her friend, and the supplies off, then I drove the very long way back to Bismarck. I got home at 12.45 a.m. It had been a very long day.