As the Keystone XL pipeline (KXL) invades our homelands at the Cheyenne River Reservation, we women are preparing for the struggle.

In December, my daughter, Marcy, helped to organize a talk about human trafficking and Missing and Murdered Indigenous Women and Children (MMIWC) happening on our reservation. At this important Women Gathering, community members and representatives of many concerned organizations initiated the Nazo Campaign — providing whistles to alert relatives to unfolding crime and violence on Cheyenne River — and a resolution asking our Tribal Council to declare a state of emergency. They then presented to the council, where our tribal nation made that declaration. 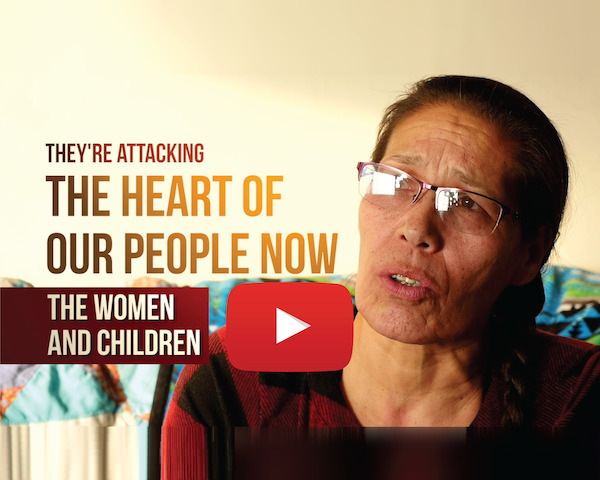 Today I ask that you watch our video and send a note of thanks and solidarity to the women of Cheyenne River for standing up to protect the safety and security of our people.

Our matriarchy must and will lead this fight. We even have two generations of grandmothers working together here! The Was’agiya Najin — “Grandmothers Standing Strong” — includes both older grandmothers (OGs) like me and younger grandmothers (YGs) like Marcy.

In addition to Was’agiya Najin, our Women Gatherings also include representation from Warrior Women Project, Women of All Red Nations, Simply Smiles, Indigenous Environmental Network, the Lakota People’s Law Project, veterans, water protectors, and more. These are powerful, alliance-building meetups, and now the tribe has heeded our warning.

That’s critical, because Big Oil is building two KXL man camps — temporary housing for pipeline workers — on either side of Cheyenne River. These dens of machismo inevitably bring with them increases in sex and drug trafficking, worsening our MMIWC epidemic locally.

Here’s how bad it is: by 2014, our state’s federal courts had handed out more life sentences for commercial sex trafficking than all other states’ combined. Because 40 percent of South Dakota’s victims are Native women, we pay the highest price.

As a girl, I was shipped off to boarding school. I experienced what it is like to have my culture stripped from me, so as a young woman I became a leader in the American Indian Movement and created the “We Will Remember” Survival School. There, I taught Marcy and other children about treaty rights, to prioritize Native sovereignty, and to preserve our traditions.

Now, together, we are helping to pass on lessons of leadership and direct action to the next generations. That starts with making sure they don’t fall prey to man camps, and it means demanding action from our tribe. As Indigenous women, we have always been on the front lines, and we know how to stay ready. Will you stand with us?

Wopila tanka — my deepest gratitude for your solidarity,

If you believe you received this message in error or wish to no longer receive email from us, please unsubscribe.