I have great news: this morning, District Court Judge James Boasberg ordered the Dakota Access Pipeline (DAPL) to be shut down within 30 days! In this momentous ruling, Judge Boasberg found that the Army Corps of Engineers failed to fully consider the environmental impacts of Energy Transfer’s crude oil pipeline, and that there were too many safety concerns to allow its continued operation. While this order only shuts DAPL down for 13 months while the Army Corps completes additional environmental assessments and safety planning, there is a good chance that when the oil is drained in 30 days, that oil will never flow again! 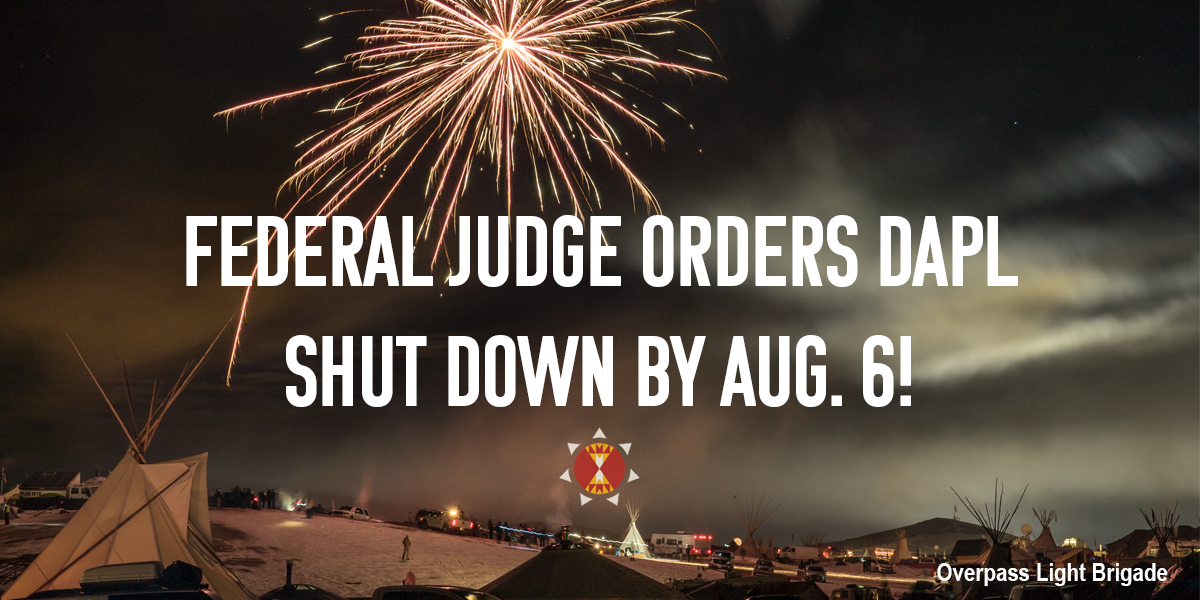 We commend the Standing Rock Sioux Tribe, the Cheyenne River Sioux Tribe, and their legal team at EarthJustice for years of dedication and persistence in this struggle to defang the Black Snake. And we are proud of the amicus brief that our legal team submitted in the lead up to this decision. We’re also elated that Judge Boasberg cited many of the questions we and our allies have raised since the beginning of the NoDAPL struggle. First, that it’s simply wrong to conduct an environmental assessment of a pipeline after it’s already been built. Second, that DAPL’s leak detection abilities are so poor it could be leaking more than 6,000 barrels of oil every day without detection, and Energy Transfer’s abysmal pipeline safety record raises that risk even further. Third, that there is no proper cleanup plan for a wintertime spill, when freezing Dakota winters make response the most difficult. Boasberg even went one step further, concluding that the drop in oil demand due to the COVID-19 pandemic makes shutting down the pipeline now less harmful to North Dakota’s economy.

So what comes next? First, Energy Transfer has to drain and shut down DAPL by August 6th. The Army Corps of Engineers then has 13 months to further study potential pipeline leaks and the dangers they pose. This ruling could still be appealed in the Federal District Court of D.C., but our analysis tells us that such an appeal is unlikely to succeed.

Thank you to each and every one of you for your tireless support, and for staying with us throughout this journey.

P.S. This has truly been a week of good news: just yesterday the Atlantic Coast Pipeline, slated to run from West Virginia to North Carolina, was canceled. In a joint statement, Dominion Energy and Duke Energy cited ongoing delays, expected cost increases, and legal challenges from environmental and other groups as threats to the project’s viability. The trend away from fossil fuels is becoming stronger with each passing day, thanks to your activism and the support of so many others like you.